The legacy of Martin Luther King Jr. reminds us to cultivate integrity in our lives along with happiness, according to Neal Lester, the founding director of Project Humanities at Arizona State University.

“I’m continually trying to respond to his call for maintaining integrity and truth that he framed as justice, peace and the social transformation and reclamation of our individual and shared humanity,” said Lester, a Foundation Professor of English at ASU.

He spoke at the 37th annual ASU Dr. Martin Luther King Jr. Celebration at Sun Devil Stadium on Thursday, where he was honored as the inaugural Faculty Servant-Leadership Award winner.

“For me, this annual holiday and recognition from my ASU community is but another opportunity to be better and to do better,” he said. “For me, doing and being better is being mindful of living and practicing those values that Project Humanities calls Humanity 101, those simple values of respect and integrity and compassion and forgiveness and empathy and kindness and self-reflection.”

Lester was among five people honored as 2022 ASU Dr. Martin Luther King Jr. Servant-Leadership Award winners. The other four were:

• Ivan Quintana, an ASU student who works as a student support specialist at Mesa Community College, which he attended before transferring.

• Silvana Salcido Esparza, chef and owner of Barrio Café in Phoenix and a community activist.

The breakfast celebration was just one of several events sponsored by the MLK Committee at ASU, according to Colleen Jennings-Roggensack, vice president of cultural affairs at ASU who served as the emcee of the event. The celebration included the winners of the statewide poster and essay contests for K–12 students, several of whom read their essays.

This is the first time that the 2022 Student Servant-Leadership Award was given to two students in one year, Jennings-Roggensack said. Banks and Quintana, both first-generation college-goers, were awarded $2,000 scholarships. 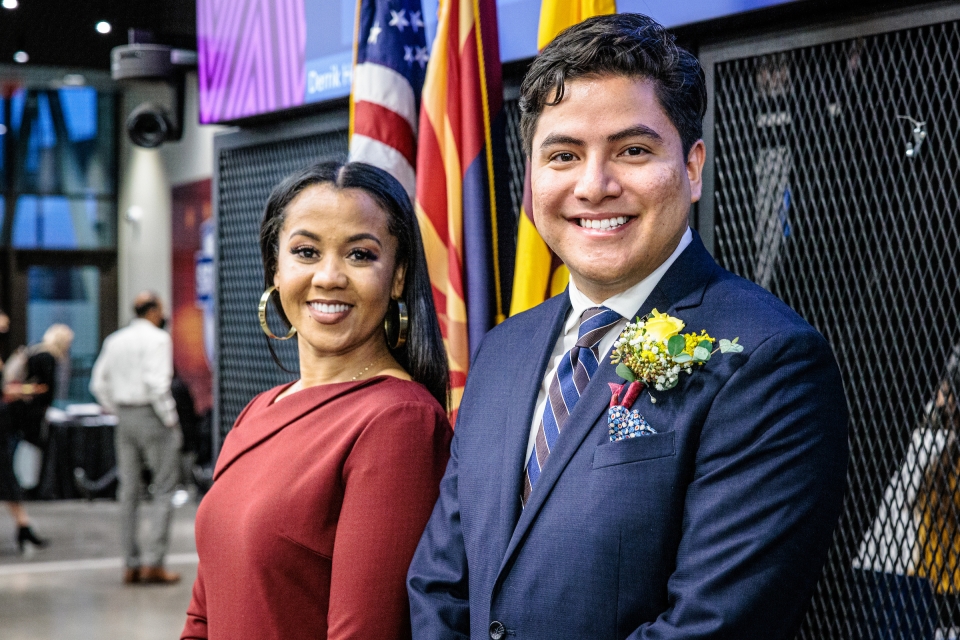 Roicia Banks and Ivan Quintana were the winners of the ASU MLK Student Servant-Leadership Award. This was the first time two students were chosen. They won $2,000 scholarships. Photo by Charlie Leight/ASU News

Banks graduated with bachelor's degrees in political science and African and African American studies at ASU. She then received a master’s degree in social work from the University of Houston. She is currently working toward a Master of Legal Studies degree with an emphasis in Indigenous law at the Sandra Day O’Connor College of Law at ASU.

She is a Black and Indigenous woman who was in foster care as a child before being adopted into a Hopi family. Her mother died of COVID-19 last year.

“It’s been a trying year personally and professionally,” she said at the breakfast celebration.

Banks worked as a social worker for state and tribal governments before starting Social Roots LLC.

“Thank you to my community,” she said. “I would not be able to do the work I do if nobody in my community saw the value in it.”

Quintana moved from a small town in northern Mexico to the U.S. at age 18 to attend Mesa Community College, where he took classes in addition to working full time.

His experience navigating the higher education system led him to became a college completion ambassador for the AmeriCorps Arizona Ready for College and Career program, helping high school seniors apply to college and complete the FAFSA form.

He transferred to ASU in 2019, where he is a senior double majoring in criminal justice and criminology and public service and public policy. He plans to attend law school.

Quintana told the crowd that he was reflecting on the theme of this year’s breakfast celebration: “Inclusion starts with us.”

“The truth is that inclusion and empathy of Dr. King sets a higher standard, where we have to challenge ourselves to include people that not only don’t look like us but might be against us,” he said.

He recalled how King met with segregationists.

“Love and empathy is what binds all of us, and all humanity is worthy of dignity and redemption.” 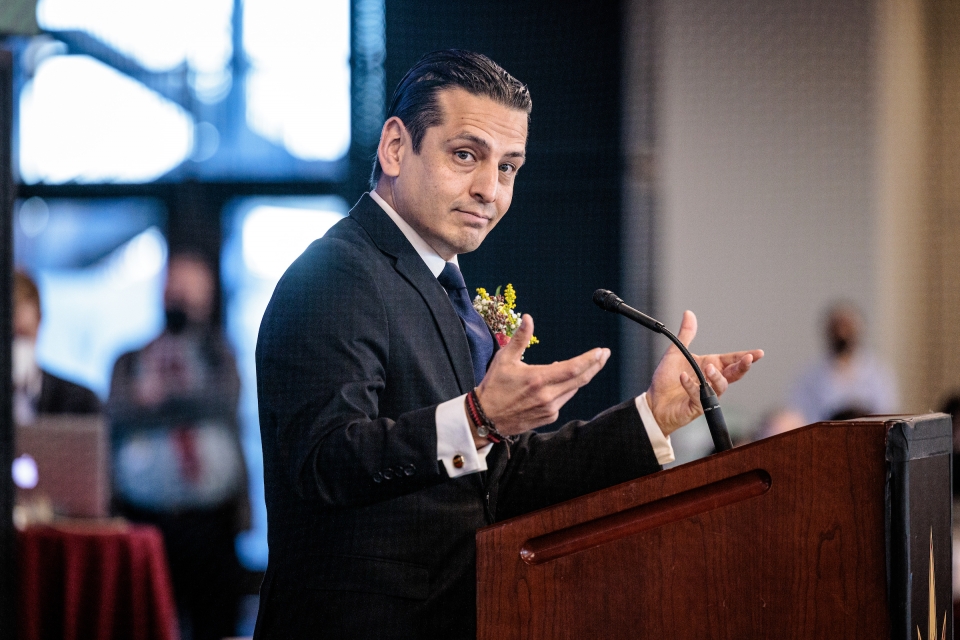 Marcelino Quiñonez, an ASU alum and the current director of educational outreach and partnerships at ASU was the winner of the inaugural ASU MLK Staff Servant-Leadership Award for 2022. Photo by Charlie Leight/ASU News

This year, the committee also gave out the first-ever Staff Servant-Leadership Award, to Quiñonez, who in December was appointed to represent District 27 in the Arizona Legislature.

He shared his favorite King quote: “The arc of the moral universe is long, but it bends toward justice.”

“I believe it bends toward justice because of what we can all do every single day to lend a hand, to make sure everyone eligible to vote has the right to vote,” he said.

Jennings-Roggensack became emotional as she introduced Esparza, whom she has known for years, as the 2022 Community Servant-Leadership Award winner.

“She cooked meals for health care workers and those in need” during the pandemic, Jennings-Roggensack said.

“And she gave up her health insurance to feed other people.” 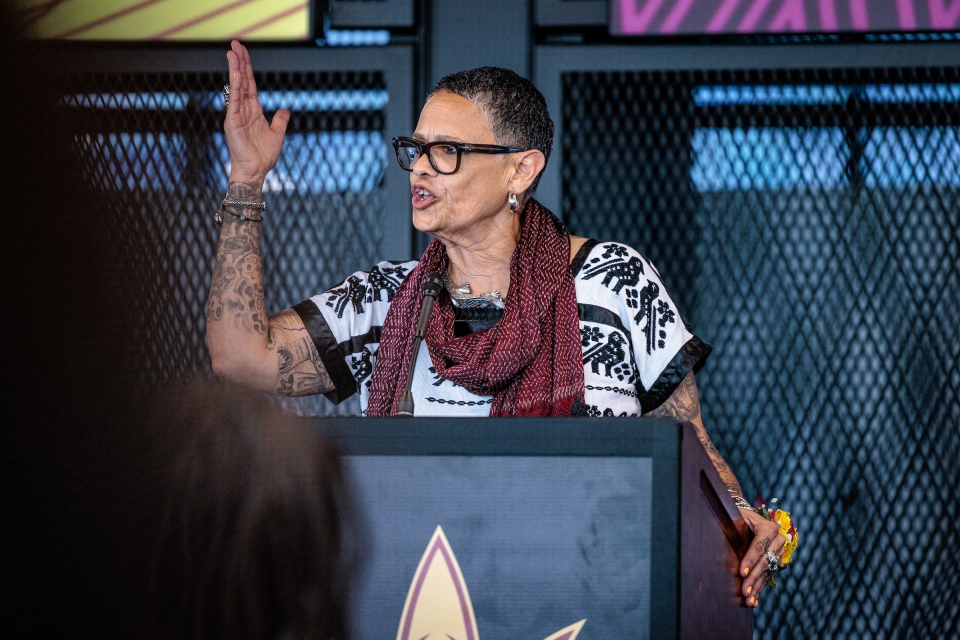 Silvana Salcido Esparza, chef and owner of Barrio Cafe, won the ASU MLK Community Servant-Leadership Award for 2022 for her community activism during the pandemic. Photo by Charlie Leight/ASU News

Esparza told the crowd how she used to accompany her father when he preached at migrant camps in central California. She would smell the tortillas the impoverished workers made, but rarely meat.

“That influenced me,” she said.

“Where are we today? Instead of going forward, we’re going backward.”

She said that politicians and educators must act to help poor people.

“You cannot fight hate — and there’s a lot of it out there — with hate. You gotta fight it with love.”