In 2019, the Arizona Center for Medieval and Renaissance Studies at Arizona State University made a definitive statement to the academic world about the issue of race in premodern studies when it hosted its inaugural RaceB4Race conference: Not only did race exist as a social issue back then, it deserves to be reconsidered in our modern-day interpretations of classical texts.

In the years since then, the RaceB4Race symposium — which comprises the ongoing conference series as well as a professional network community for scholars from across the country to engage on issues of race in premodern literature, history and culture — has grown considerably. Now, the Andrew W. Mellon Foundation is recognizing the impact RaceB4Race is making with a $3.5 million collaborative, cross-institutional grant to be dispersed over three years. 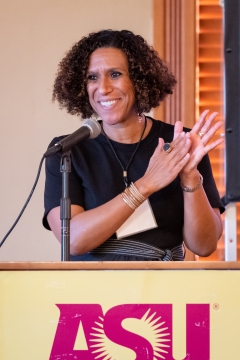 “The investment that ASU has made in premodern studies is unprecedented, and the Mellon grant allows us to sustain, build and innovate the important work we started with RaceB4Race,” said Ayanna Thompson, director of the Arizona Center for Medieval and Renaissance Studies and creator of the RaceB4Race symposium. “There can be no doubt now that ASU is leading premodern studies in the 21st century.”

The goal of the grant is to expand and diversify the reach and tools available to those contributing to the robust body of premodern critical race scholarship, which, while having revealed some of the earliest formations and elements of systemic racism, has yet to find its way into higher education curricula and wider public discourse.

“Our understanding of the foundations of our society from the past is essential,” said ASU President Michael M. Crow. “We created the destructive social construct of race over time, and need to understand how and why. This focused grant helps us to sort out and solve for this significant error.”

Jeffrey Cohen, dean of humanities in The College of Liberal Arts and Sciences at ASU, also expressed enthusiasm for the grant’s potential.

“Under the visionary leadership of Ayanna Thompson, the Arizona Center for Medieval and Renaissance Studies has become the leading international voice for finding in the past visions for a more just and humane future,” he said. “The center’s work on premodern critical race studies has been trailblazing, and to see its endeavors so robustly supported by the Mellon Foundation (itself a model for transforming the humanities) is a dream come true.”

Video of The Future of RaceB4Race Is You

Video by the Arizona Center for Medieval and Renaissance Studies

The grant will provide funding for the hiring of new staff members, postdoctoral fellows, predoctoral fellows and undergraduate students to engage in activities that include:

This is a win not only for RaceB4Race but the field of premodern studies at large.”

Ruben Espinosa, a noted Shakespeare scholar who is the author of “Shakespeare on the Shades of Racism,” joined ASU in March as an associate professor of English and associate director of the Arizona Center for Medieval and Renaissance Studies.

“ASU’s RaceB4Race has redefined the way we think about premodern studies,” Espinosa said. “With its field-changing, visionary programming, RaceB4Race has quickly ascended as one of the most significant professional network communities in the nation for premodern scholars of color. Without doubt, the Mellon grant allows RaceB4Race not only to deliver on its commitment to promote premodern critical race studies, but it will also provide us with the resources and opportunities to lead our field in exciting new directions with racial justice at the fore. This is a win not only for RaceB4Race but the field of premodern studies at large.”

Both Thompson and Espinosa look forward to seeing how the knowledge creation and dissemination systems made possible by the grant will challenge the European medieval structure of the academy — a system they say prioritizes individuality, competition and exclusion — and model what it means to re-create it in a structure that prioritizes the collective, cooperation and inclusivity.

Top photo: Scholars take notes during the "Appropriations: A RaceB4Race Symposium" event at ASU's Tempe campus in January 2020. Photo courtesy of the Arizona Center for Medieval and Renaissance Studies