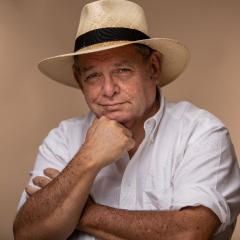 “I’m a 19th century African Americanist,” said Lockard, who teaches in the Department of English and is an affiliate faculty member in African and African American studies and Jewish studies.

Imagine Lockard’s surprise, then, when he was asked to write a chapter on the history of U.S. prison literature, from the colonial days to the riots in Attica prison, and came upon a book and author he hadn’t heard of.

The book was “He Leadeth Me,” an autobiography by Frances Joseph-Gaudet, an African American woman who was a prison reformer in New Orleans during the late 1890s and early 1900s. She helped establish the first juvenile court in the city and opened the Colored Normal and Industrial School, which eventually encompassed 105 acres and served as an orphanage and boarding school for children with working mothers.

Lockard was intrigued. He began to research Joseph-Gaudet, and that research turned into an article that will be published in April in the journal Southern Studies. It’s the first research publication on Joseph-Gaudet.

As part of Black History Month, ASU News spoke to Lockard about Joseph-Gaudet and his article.

Question: What made you decide to write about Joseph-Gaudet?

Answer: I came across this (book) "He Leadeth Me," which I was unfamiliar with. She has no reputation, her book hasn’t been treated in the critical literature at all, and she represents part of the history of U.S. prisons. As I began to explore, I understood that there was a strong activist element in African American communities that pushed back against mass incarceration from an early point. It’s not a recent phenomenon. It has been going on since at least the progressive era and before, so I decided we needed to learn more in order to fill in this missing history.

Q: Was it important for you to document the work African Americans did in prison reform?

A: Yes. When you read the history of prison reform in the United States, it’s all about white men. What I’m providing in this paper is that the African American community has been active in dealing with this issue, often through its churches. The historical record needs to be wide-eyed and inclusive. This paper is only the beginning. It deals with one figure. There are more. We need to look at African American history to understand that they created often very impoverished means of communal self-care. And this is one person who did a hell of a job. She built a large institution.

Q: How difficult was it to research the article given the time period?

A: If you do research in cities like New Orleans or Louisville, Kentucky, where there’s been a lot of humidity for a very long time, paper records disappear. There’s very little left recorded about Joseph-Gaudet. So, I gathered what I could. She is known locally among New Orleans historians and people aware of the city’s history. There is a primary school named after her in New Orleans, and about 20 years ago, the Episcopal Church began a process of canonization for her. (The Episcopal Church holds an annual feast day in her honor on Dec. 30.)

Q: What struck me in reading your article is how Joseph-Gaudet understood that she had to appease white men with her language and behavior in order to get anything done for African American prisoners, whether they were adults or juveniles.

A: This is one person who did a hell of a job. She built a large institution. She had to make compromises on the way. She had to be nice to people who were profoundly racist and patronizing. She had to be the pet. But she needed the money to feed the children. She needed the money to house them, to educate them, and we will do anything for children. I'm sure she swallowed some hatred of what she was doing. But she knew what she had to do to get the money that made it all work. And she did that successfully.

Q: Your article goes deeply into her faith. Isn’t that emblematic of many African American prison reformers?