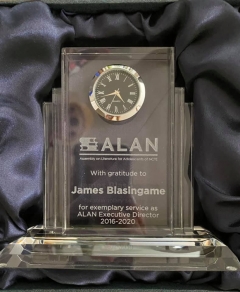 If there was ever a professor more willing to give credit to others for their accomplishments than Jim Blasingame, we don’t know them. An expert on young adult literature, the Arizona State University English professor is always the first in line to congratulate students and colleagues, details of whose personal lives he recalls with an impressive accuracy — character traits that demonstrate both his genuine enthusiasm for their success as professionals as well as his appreciation for them as fellow humans.

Now, Blasingame is getting some well-deserved recognition of his own. Earlier this year, he was honored with a lifetime service award from the Assembly on Literature for Adolescents of NCTE (ALAN) — the young adult literature arm of the national professional organization for teachers of English — for his work in the field.

According to the award statement, “Jim consistently leads by example and is steadfast in his commitment to equity and representation both in young adult literature and within ALAN. The grace with which he has navigated his leadership positions and the important advocacy work he has accomplished are constant reminders to all of us that love, empathy and compassion are at the center of our shared work.”

After more than two decades in secondary education, Blasingame came to ASU in 2000 to pass his passion for teaching literature to young adults on to college students. Following this spring’s commencement, a group of them showed their gratitude for that when they invited Blasingame to a Zoom call where they surprised him with the unveiling of a Sun Devil Legacy Brick they had purchased in his honor. 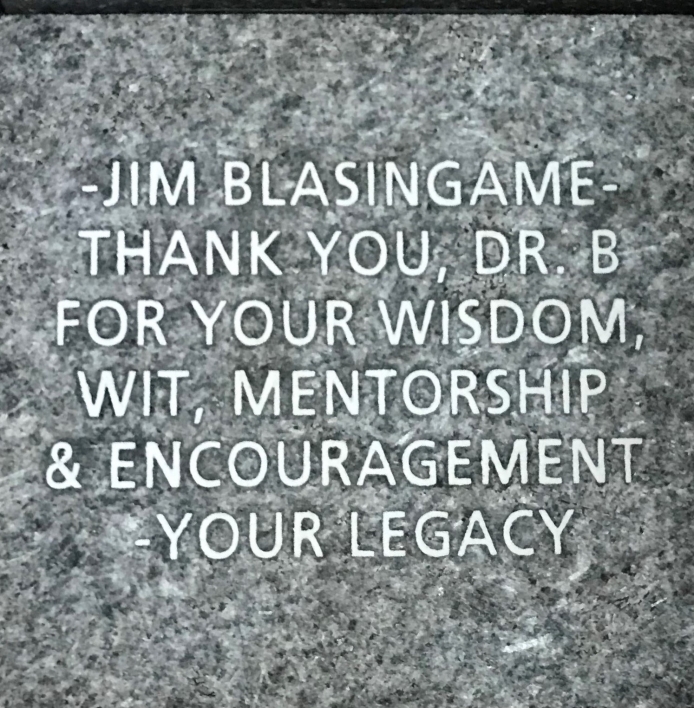 In addition to teaching, Blasingame has found time over the years to author or co-author several books, including “Stephenie Meyer: Into Twilight” and “Books That Don’t Bore ‘Em: Young Adult Literature for Today’s Generation”; give presentations performing cowboy poetry at the National Council of Teachers of English convention, the International Literacy Association and the Western States Conference on Rhetoric and Composition; and serve as a student mentor, for which he was named the 2014 ASU Doctoral Mentor of the Year.

One of Blasingame’s most cherished projects is ASU’s El Día de los Niños/El Día de los Libros event, an annual celebration of youth literacy and cultural heritage that brings roughly 500 local K–12 students to the ASU Tempe campus for a day of meeting famous authors and artists, as well as small-group writing and illustrating workshops. This year, the event went virtual — and global — in response to the pandemic, with over 1,000 students participating from countries like Indonesia, India, Ghana, Senegal and Brazil, and for the first time, students were able to enter a writing contest to win monetary prizes for their schools.

And despite having just won a lifetime service award, Blasingame is showing no signs of slowing down. Next up, he’s helping to organize the Building Bridges to Life conference alongside ASU alumnus and young adult author Bill Konigsberg. The conference is geared toward preventing teen suicide through literature.

Editor's note: The following has been lightly edited for length and clarity.

Question: Congrats on your ALAN Award! What was your reaction when you found out?

Answer: The people who I have worked with these last 25 years in ALAN are just the most wonderful people in the world. People I greatly admire who are authors and professors and teachers and librarians who are making a big difference in the world in regards to diversity in literature and getting good books into the hands of young readers, books that will save lives. I know that because I’ve done research with authors who tell me that kids come up to them at book launches and say, “Your book saved my life. You knew my story.” So it was overwhelming and wonderful to receive this award.

Q: Before you came to ASU in 2000, you spent 24 years in secondary education. When did you know that teaching about and advocating for youth literacy was going to be your life’s calling?

A: There was a point where I wanted to be a college wrestling coach — and I was for a time — but I found there was a big hole in my life. I missed the kids and the books and the poems. I missed that young person in the back of the room who never says a word, then you get their first paper and find out, oh my goodness, there’s a lot going on in their mind and there’s a great deal of depth. Or you see kids’ eyes light up when they’re reading a book.

I was teaching a high school class back in Iowa and everything I was trying was failing. Then I found a box of Chris Crutcher’s book “Running Loose,” about a young man and woman in high school in Idaho. It had all the usual suspects in it: the coach they look up to, another coach who tries to exploit them, a boyfriend-girlfriend exploratory relationship. So I passed those out, and the next day, everybody was in class with their books already open, ready to talk about it. That had never happened before.

Q: You’re a big advocate for youth access to literature, and in that respect, have been involved organizations like Kids Need to Read. Why is access to reading so important for youths?

A: In the story I just told, the reason those students were so excited to talk about the book was because they identified with the characters; these were people that they knew, who had problems they had faced, problems about figuring out who you are. The business of adolescence is figuring out who you are and what you’re going to do about it. And literature helps us with that. Kids are both discovering and creating their identities when they read. And reading widely helps them create the best version of themselves.

What’s more, reading in school encourages kids to read on their own, and research shows that self-selected, independent reading — when kids pick the books they read themselves — is not only good for their mental health and literacy skills, but their overall test scores go up. Research also shows that reading improves empathy, because it helps kids imagine what it must feel like to be in somebody else’s shoes.

Q: It's been in the news a lot lately that teachers and parents are concerned about learning losses among youth due to the pandemic. Do you think that’s going to be a problem as far as kids keeping up with literacy goals?

A: I haven’t seen any research on that, but I know that some schools, instead of trying to just reproduce what they were doing in the classroom on Zoom, said let’s just read books. And we’re going to let kids pick the book and then have them write about it, rather than reading just a few passages and answering some multiple-choice questions. Holistic literacy activities like that take time, but because everybody had a whole lot of time, they were able to do it. And again, research shows that given the opportunity to write about things they are invested in, kids grow faster as writers themselves. They produce a lot more volume and write with more complexity and sophistication.

Q: You’ve also been a big advocate of Banned Books Week, saying banning books does a disservice to youth. Then, in March of this year, you spoke with AZ PBS’ Cronkite News in favor of the “unpublishing” of some of Dr. Seuss’ books. How is that different from banning books?

A: Some of Dr. Suess’ cartoons were just terribly racist, and that’s harmful to kids. For example, one of my favorite professors, Dr. Virginia Loh-Hagan at San Diego State, has done studies on children’s books by, for and about Asian folks, and she discovered that when an Asian-heritage kid reads a book with stereotypes about people of Asian descent, they internalize that. And it’s very hard to develop a positive, productive self image if you’re being fed that kind of toxic literature. So something like that is clearly harmful, but what a lot of people want to do with banning books is to more or less censor more mature themes like teen pregnancy because they think it might encourage it. Well, sorry, but that train left the station a long time ago; there’s no reeling adolescents back into childhood. If they aren’t reading about these kinds of things in books, then they’re being exposed to them in real life. And sometimes it’s better to have them read about these things and be able to process them from a safe distance through a book first. Reading makes for educated citizens who are able to make good decisions and contributions to society. Ignorance has horrible consequences.