When Clint Smith was growing up in New Orleans, it was impossible to escape the adulation of the Confederacy. Every step he took brought him to a monument or street that idolized white men who fought to uphold the enslavement of Black people.

“I was thinking about what it meant that I grew up in a majority Black city in which there were more homages to slavers than there were to enslaved people,” Smith said during a talk at Arizona State University on Tuesday.

Smith said that the names and iconography are more than symbols.

“They are reflective of the stories that people tell. And those stories shape the narratives that communities carry, and those narratives shape public policy and public policy shapes the material condition of people’s lives,” he said.

RELATED: Controversial statues: Should they stay or should they go?

In 2017, the city was removing some of the statues when Smith began thinking about how New Orleans, and then other places, tell the stories of their history.

That led to a cross-country trip to visit nine places with a link to slavery. That trip led to Smith’s book, “How the Word Is Passed: A Reckoning With the History of Slavery Across America,” which was released in June.

Smith, who also is a poet, teacher and staff writer for The Atlantic, was this year’s speaker for the Jonathan and Maxine Marshall Distinguished Lecture Series sponsored by The College of Liberal Arts and Sciences at ASU. After his talk and a reading from his book, Smith sat down for a Q&A session with Ruben Espinosa, associate professor of English and associate director of the Arizona Center for Medieval and Renaissance Studies.

Smith told the audience how one of the sites he visited was Monticello, the Virginia home of Thomas Jefferson, who Smith said personifies the cognitive dissonance of the story that Americans tell themselves.

“America is a place that has provided unparalleled, unimaginable opportunities for millions of people across generations in ways their ancestors could have never imagined, but it’s done so at the direct expense of millions and millions of other people who have been intergenerationally subjugated and oppressed,” he said.

“Both of those things are the story of this country.” 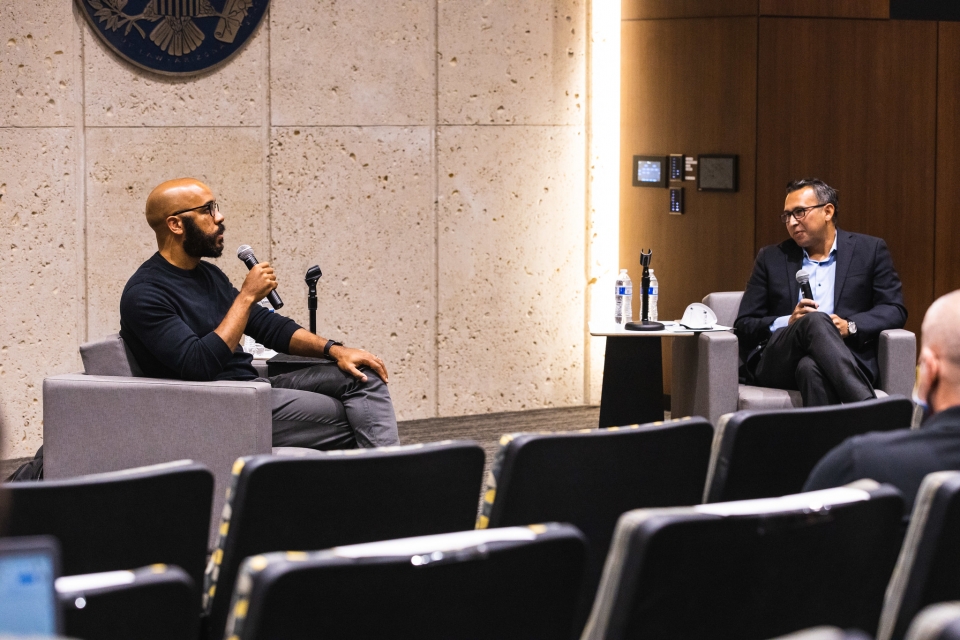 Author and poet Clint Smith (left) participated in a Q&A session with Ruben Espinosa, an associate professor of English at ASU. Photo by Maximillian Conacher/College of Liberal Arts and Sciences

Jefferson wrote one of the most important documents in the Western world and also enslaved more than 600 people over the course of his lifetime, including four of his own children.

“He wrote in one document that ‘All men are created equal’ and wrote in another document that ‘Black people are inferior to whites both in endowments of body and mind.’ He said the slave was ‘incapable of love,’ ” Smith said.

So how does Monticello tell that story? The docent conducting the tour gave a “master class of the contradictions embodied in Jefferson,” Smith said.

Afterward, Smith talked to tourists who attended the tour who were shocked to hear that Jefferson was an enslaver.

“These places are in a unique position to have people who might not encounter this information in another context to serve as an entry point for them to think differently about the history of this country and to think more holistically about how they are situated within it.”

Smith also visited Angola in Louisiana, the largest maximum-security prison in the country. It’s on the site of a former plantation, and 75% of the prisoners are Black men who are controlled by armed prison guards on horseback.

“If you were to go to Germany and have the largest maximum-security prison in Germany built on top of a former concentration camp in which the people held there were disproportionately Jewish, that place would rightfully be a global emblem of anti-Semitism,” he said.

“It would be abhorrent and disgusting, and we would never allow a place like that to exist.”

Smith said the visit to Angola made him think about how the story of white supremacy numbs American society to its violence.

While Monticello is beginning to show the complexity of its story, Angola is not. The gift shop sells coffee mugs and shot glasses with the silhouette of a watchtower and the slogan, “Angola, a gated community.”

Smith said that he sensed a change among Americans after the murder of George Floyd, with a more sophisticated understanding of how racism is not just interpersonal, but systemic and historical.

“And now more people understand it as the state-sponsored mechanism through which housing segregation was perpetuated by the federal government throughout the 20th century.”

But that understanding has created a more sophisticated backlash from people who see the full story of American history as a threat to their identity. That has led to state-level legislation targeting what kind of history can be taught, he said — because for those aggrieved people, history is not about truth.

“It’s about being able to tell yourself a certain story that allows you to situate yourself in the American narrative in a way that feels empowering,” he said.

Smith said that “How the Word Is Passed” is essentially a letter to his 15-year-old self, who grew up surrounded by Confederate iconography.

“I didn’t have the language to understand why this Black city had a leader of the Confederacy on a 60-foot statue in the middle of a traffic circle, and not even fully understanding truly what the Confederacy was,” he said.

Smith said that as an adult, when he began researching and learning more about the Confederacy, it gave him context and a sense of understanding about New Orleans, which was often denigrated as “the murder capital of the nation” or criticized for promoting cultural decay.

“Implicit within so much of that was all of the things that people were saying was wrong with Black people. I knew it was wrong, but I didn’t know how to say it was wrong,” he said of his younger self.

“I think the most insidious version of that is that you begin to internalize some of things the world tells you about yourself.

“The power for me of learning about American history is that this country can’t lie to you anymore about why it looks the way it does.”

Top image: Poet and author Clint Smith was the featured speaker of the Jonathan and Maxine Marshall Distinguished Lecture Series on Oct. 19 at ASU. Photo by Maximillian Conacher/College of Liberal Arts and Sciences