Communing with the desert

Sometimes the best conversations are the ones where all we do is listen. And when it comes to communing with the environment, there’s a lot that can be learned.

That’s the idea behind “Dust and Shadow: Audio Attunements for Desert Living,” the first project to come out of the recently launched Desert Humanities Initiative at Arizona State University’s Institute for Humanities Research (IHR).

Imagine a space awash in pink-purple light, the deceptively makeshift wooden structure inspired by a hypothetical Solarpunk future. Maps, books and artifacts are tucked around the space, adding context and layers to the main experience: sounds of the desert both distant and urban. That’s the listening salon at the heart of the project.

Along with IHR, ASU’s Julie Ann Wrigley Global Institute of Sustainability, Center for Philosophical Technologies and Synthesis Center hosted an event at the Tempe campus on Monday, Sept. 23, intentionally timed to take place on the fall equinox, to introduce the project to the community.

“Dust and Shadow” — a transdisciplinary research collaboration between ASU faculty working in the environmental humanities, the aforementioned units and international artists Maja Kuzmanovic and Nik Gaffney (founders of FoAM) — seeks to encourage a reimagining of our fractured relationship with our desert environment and consider possible futures via sensory experiences.

The Sept. 23 event began with an immersive lecture given by Kuzmanovic at the Memorial Union that felt like a temporal tour of the Arizona landscape through narrative poetry and photographs scored by the sounds of the desert, followed by a reception at Hayden Library, where the new Acoustic Ecology Salon was declared officially open.

The salon, located on Hayden’s main concourse level in room C55, will be open through Sunday, Dec. 8. It is meant to be a space for everyone in the ASU community, but especially students, to feel welcome to spend time interacting with materials like archival maps, books, artifacts, photos and sounds in order to develop a new appreciation and understanding for the place where they live. 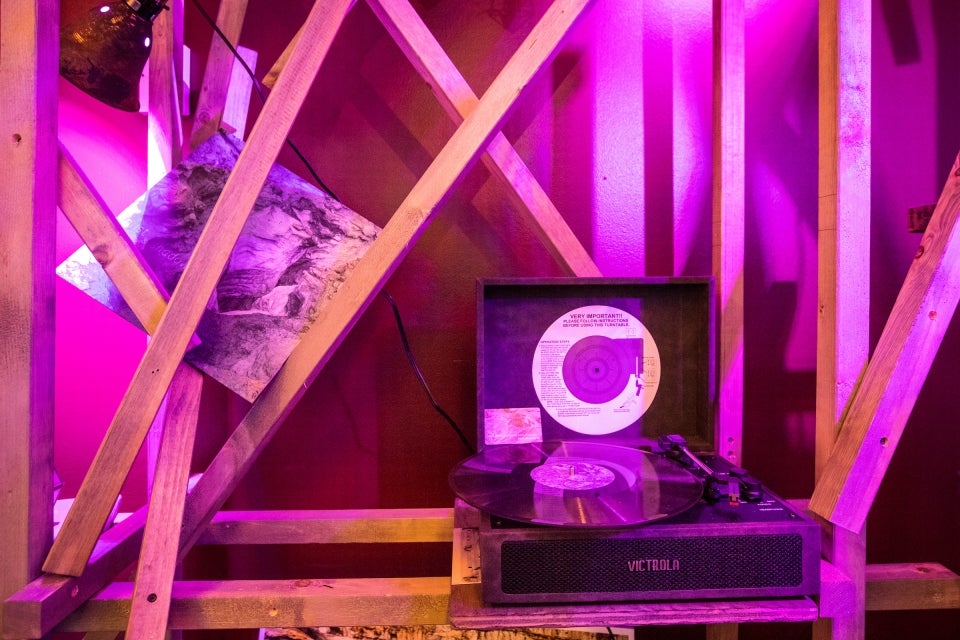 The "Dust and Shadow" vinyl album is available for visitors of the Acoustic Ecology Salon in Hayden Library to play at their leisure through Sunday, Dec. 8. Photo by Charlie Leight/ASU Now

The reception at Hayden also served as a launch party for the vinyl album titled “Dust and Shadow,” a collection of atmospheric sounds recorded by artists Kuzmanovic and Gaffney over two years at sites such as the Grand Canyon, Coal Mine Canyon on the Navajo reservation and the Cave Creek exurbs of Phoenix.

The album is available at the salon for visitors to play at their leisure. At times haunting, grating and serene, it is a striking reminder that the root word of Sonoran (as in the Sonoran Desert that covers much of the state) is “sonorous.”

From a train crossing punctuated by the caws of a bird to coyotes singing in chorus with the far-off wails of an ambulance, it tells an aural story in which nature and culture are in constant conversation.

“This soundtrack exists not to cover up or emphasize existing sounds, but to weave them into a new sonic fiction — one in which Phoenix becomes a city in the desert rather than a city despite the desert,” Kuzmanovic and Gaffney said in a written statement.

The entire album is available to listen and purchase on Bandcamp. 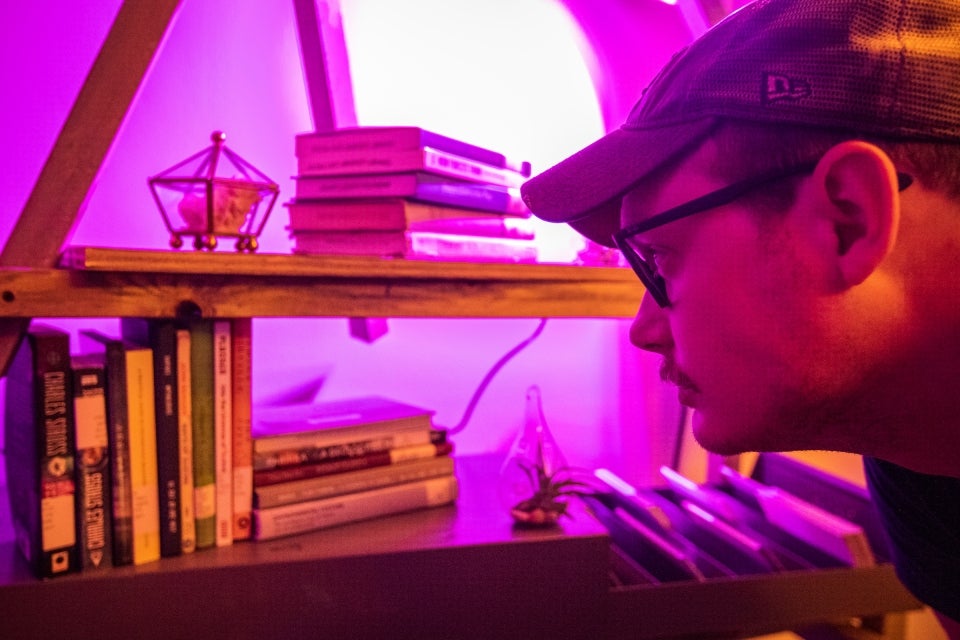 As part of a $380,000 grant from the Andrew W. Mellon Foundation, ASU Library will be observing how students interact with the print materials in the salon. Curation specialist Emily Pattni helped choose books to include in the salon, including Frank Herbert’s classic sci-fi novel “Dune,” a story of survival set in a barren wasteland of the future.

“It’s intended to be a cavern of curiosity,” Pattni said. “An alternate place of learning that brings the desert inside.” 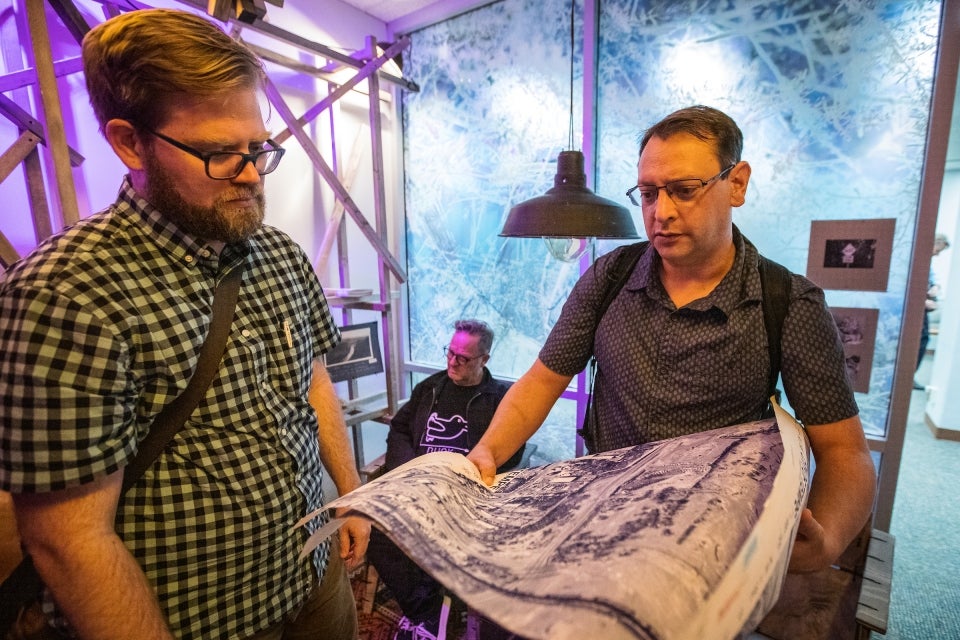 The library also contributed several archival maps to the space that demonstrate the development of the region over time. According to English Professor and Director of the Desert Humanities Initiative Ron Broglio, the hope is that visitors use the maps to reflect on ways of living and dwelling in the desert, and perhaps envision better, more sustainable practices for the future.

“Often, the way we live — the habits of life, the way we dwell, the types of buildings we're in, all of that — were ideas formulated on the East Coast or in the Midwest and then imported into the desert,” Broglio said. “So the idea here is that rather than imposing onto the desert landscape, that we listen to it and build from that.”

Broglio pointed to the infamous urban sprawl of Phoenix and the miles of crisscrossing blacktop highways as examples of how we have failed to listen to the desert in the past, while acknowledging that they are representative of larger, structural problems that an individual alone cannot change. However, he said, we can be mindful of things like water use and the carbon footprint of the foods we consume. And he likes to remember a couple of maxims he has heard from biologists over the years: “Are we being good ancestors?” and “Care of the possible.”

“It’s about what we’re leaving for future generations,” he said. 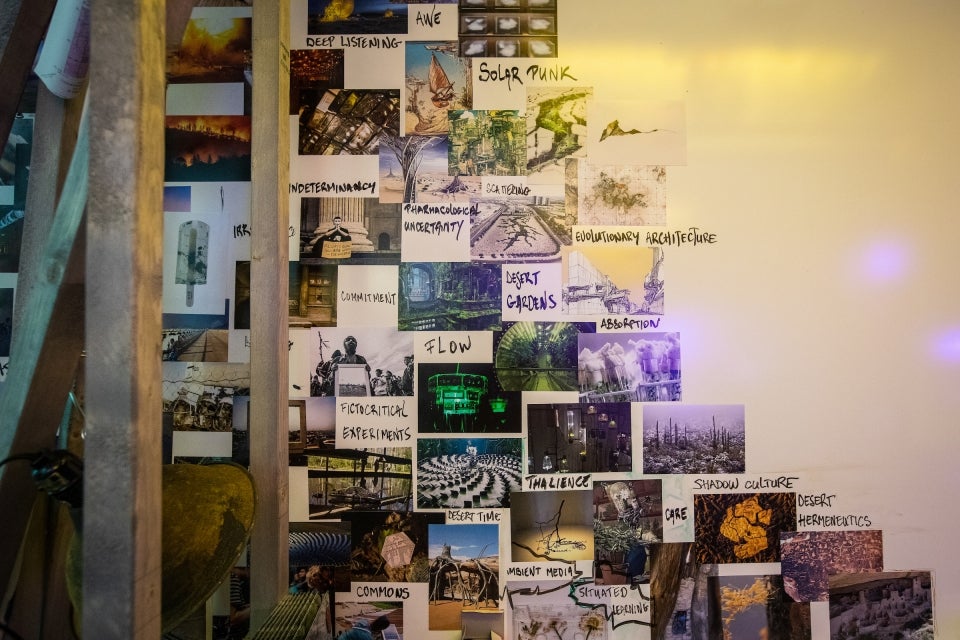 International artists Maja Kuzmanovic and Nik Gaffney spent two years collecting artifacts and sounds of the desert, some of which are on display in the salon. Photo by Charlie Leight/ASU Now

Images and phrases also adorn the space. Many of the photos were taken by Kuzmanovic and Gaffney during their multiple excursions into the desert. They depict dry, cracked mud, rolling hills of saguaros and otherworldly tree trunks.

A native of Belgium, Kuzmanovic said she was surprised to find the desert teeming with life, despite its seemingly inhospitable nature.

“I expected the desert to be much more empty, but it’s so full of life, life that is really alien to me,” she said. 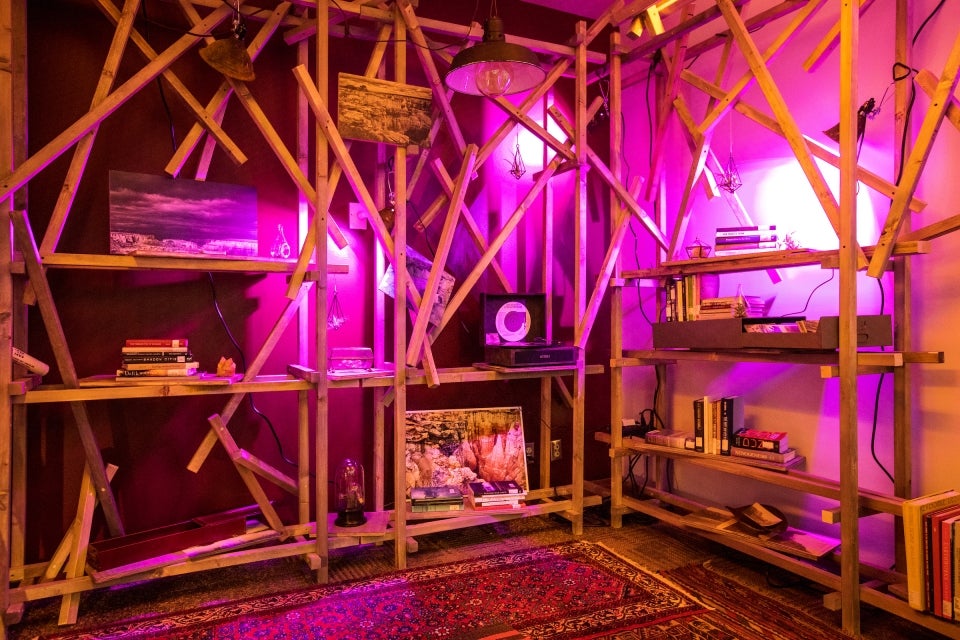 The design of the Acoustic Ecology Salon was inspired by a hypothetical Solarpunk scenario set in the city of Phoenix in the future or a parallel present. Photo by Charlie Leight/ASU Now

The design of the overall space was inspired by a hypothetical Solarpunk scenario set in the city of Phoenix in the future or a parallel present. In the scenario, Hayden Library is both a living archive and underground refuge where the salon acts as a pseudo learning pod-slash-lounge where scholars meet to work, converse and rest among a material collection of histories, field notes and artifacts that describe how this world came to existence.

“It’s highly interactive, Broglio said. “You can sit there and read while listening to the desert landscape. And everything in the space is analog because we wanted to explore what it means to take analog representations of what's just outside our doorstep and move between the immersive experience of being in the desert out there and learning from the desert from within this pod, to create a porous membrane between the library and the desert itself.” 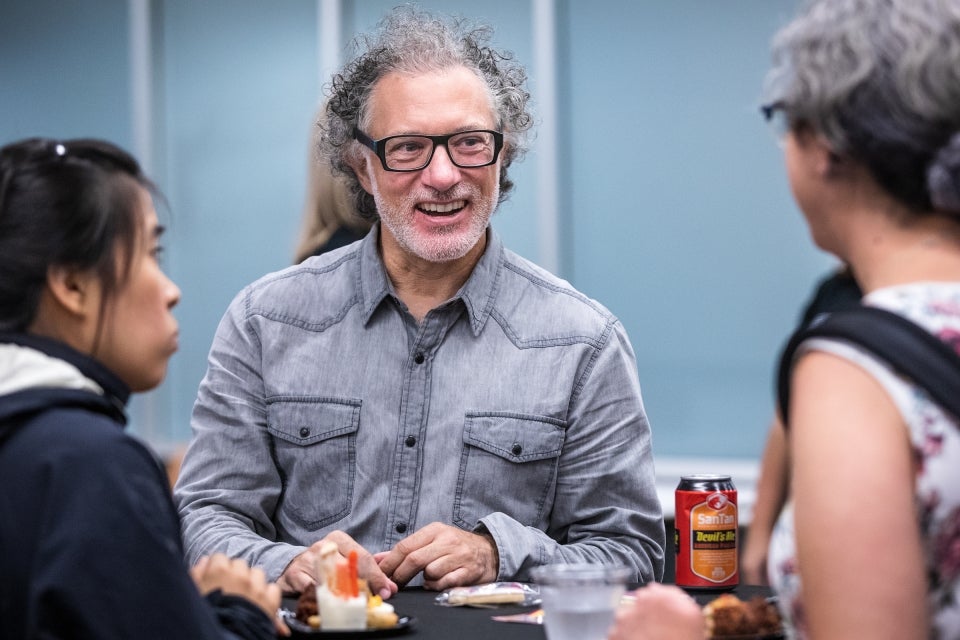 The Desert Humanities Initiative started out as a pet project of ASU Humanities Dean Jeffrey Cohen, who joined the university in 2017 after more than two decades at George Washington University in Washington, D.C.

“One of the reasons I was very much attracted to this position at ASU is because of the deep strengths in things that people are already doing, particularly among them, environmental humanities,” Cohen said.

In envisioning the initiative, he convened a group of faculty and asked them: “What kind of environmental humanities work could you do here at ASU that could be particular to this place and to our students?”

“Dust and Shadow” is just the first in a series of similarly themed projects planned, including an upcoming “water walk” in collaboration with the Museum of Walking that will take place in the spring of 2020 and be led by the initiative’s inaugural fellow, Sharon Day. Throughout the 2019-20 academic year, Day will visit ASU several times to engage in conversation about water practices, including Nibi Walks and the walking practice of praying for the waters. She'll discuss those during a Nov. 13 talk at the Heard Museum. Her visits will culminate in a walk that begins at the headwaters of the Rio Salado and ends at the confluence of Gila River, on Feb. 14-16, 2020.

Also on the roster are a “desert attunement” symposium, a lecture series, an ethics and sustainability food course and the performance of a new desert-themed musical composition.

“In a variety of ways,” Broglio said, “what we’re looking to do is to expand this into a series of experiments where different faculty might be able to propose interactive installations at ASU so that students can become more aware of the desert itself and how we mediate or represent the desert through different disciplines and technologies.”

Top photo: The "Dust and Shadow" vinyl album is available for visitors of the Acoustic Ecology Salon in Hayden Library to play at their leisure through Sunday, Dec. 8. Photo by Charlie Leight/ASU Now