It's a tradition in Dakota Lovins’ family to watch the movie “Elf” on Christmas Eve just before bed. “It’s always been my favorite Christmas movie,” Lovins said.

One year, the normally happy-go-lucky Arizona State University transfer student was unfortunately "gifted" with appendicitis. Under anesthesia before surgery, Lovins began speaking in nothing but “Elf” movie quotes.

There was something about Lovin's channeling of the oversized, naïve-but-lovable elf that stuck.

“It really took off in my family,” Lovins said. “I ended up getting the costume that Christmas to really lean into my new identity and spread some Christmas cheer.”

Lovins is still spreading his trademark cheer. He also still has the costume, and in keeping with his self-described “very silly, whimsical sense of humor,” he’s made his elf persona his Twitter profile photo. Unsurprisingly, Lovins hopes to channel his jolly and creative energy into writing children’s books someday.

Lovins is completing a Bachelor of Arts in English (literature) degree this fall and he’s well-prepared for life after graduation. Yes, he had fun as a student: he was a director for Tempe Late Night, a troupe of students who wrote and performed sketch comedy shows in the Memorial Union a few times each semester, pre-COVID-19. But he also completed meaningful, skill-enhancing professional development experiences. He was a communications intern for ASU Women’s Basketball and he also interned as a writing mentor with ASU’s Prison Education Programming. He points to the latter internship as a formative one (more on that in our interview).

Lovins will head straight to a job born directly from another internship – a virtual one, with Cisco, the tech company – after graduation.

“I really hit it off with the team,” he said. “They ended up inviting me back to work with them full time when I graduate. I'm super excited for it: our team mainly works with the film, television, and entertainment industries, which are right in line with my interests.”

All this and Lovins is finishing his ASU career with a very merry 4.25 GPA.

We caught up with Lovins to find out about a few more things, including whether it's possible to study on the light rail and on which instrument he hopes to someday play the song, “Man or Muppet.”

Answer: To make a long story short, I had several “aha!” moments where I realized I wanted to study English, but I foolishly ignored them all. Then, in my second-to-last semester, I went to my first day of classes for my major at the time, sports journalism, and realized that none of them sounded interesting or exciting to me. So, in a moment of my trademark combination of brash confidence and absolute panic, I swapped into all English courses to give them a try. I went to my first day of classes for those, loved them all, bought all of the textbooks, officially changed my major, and waited until after the drop class deadline had passed to tell my parents.

A: I’ve been lucky enough to spend this semester an intern for the PEN Project, where a group of ASU students work with incarcerated people to provide them with feedback on their creative writing endeavors. Every line of every poem, story and memoir that I’ve read as a part of this program has moved me, taught me and changed me more than anything else during my time in college. 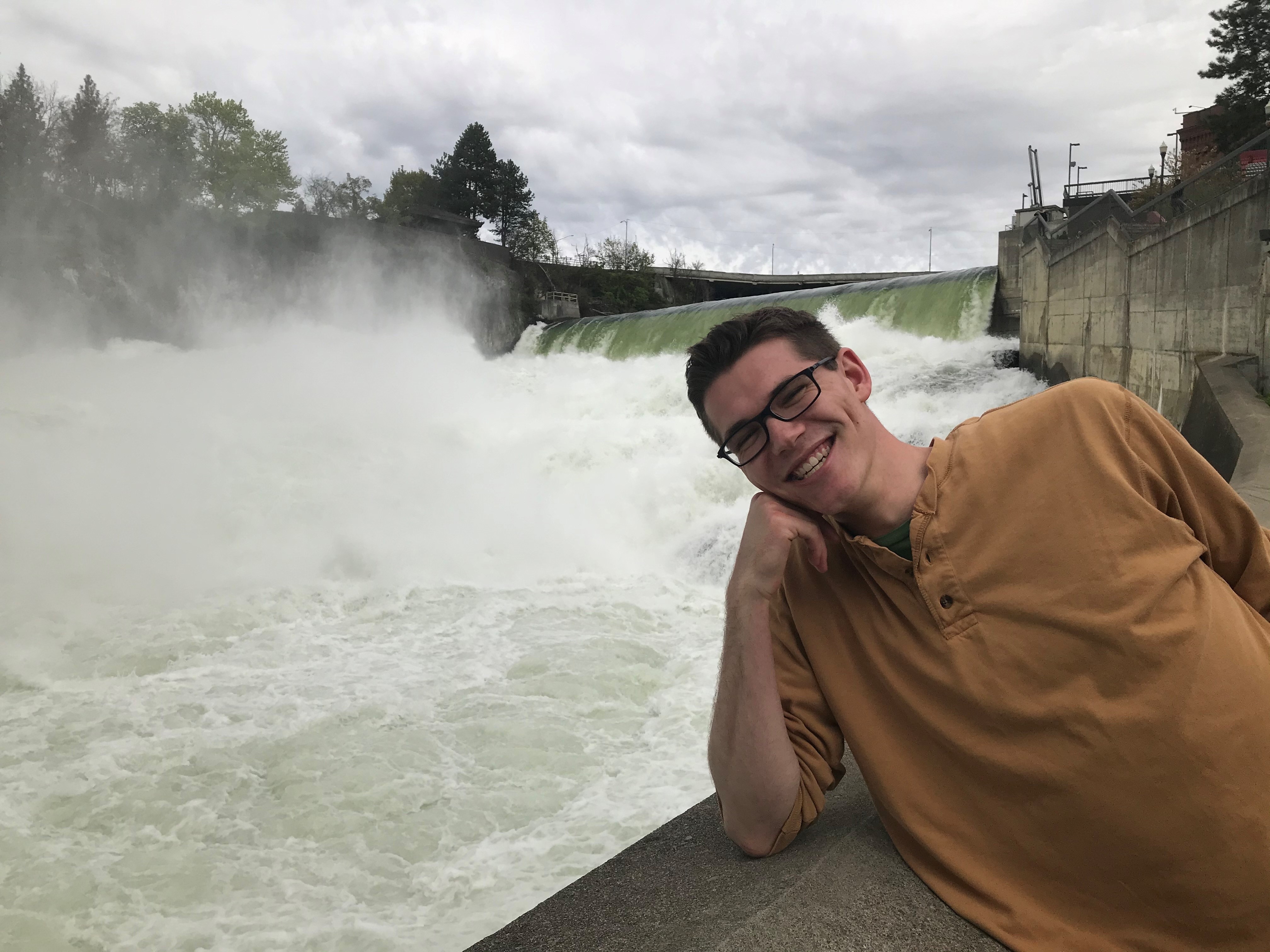 Graduating English major Dakota Lovins poses in front of Spokane Falls in Spokane, Washington, where he’s lived since 2011. Though a Tempe campus student, Lovins has been back in Spokane since March due to the pandemic and has attended classes via ASU Sync.

A: The answer that makes me sounds like I am smart and thoughtful is that I really liked ASU’s sports journalism program, and that I had an internship lined up with the women’s basketball team to work as their video editor and graphic designer.

The answer that is more accurate is that I had already gone to school at Emerson College in Boston — too far away from home — a community college near my home in Washington state — too close to home — and ASU was the perfect distance, had warm weather and seemed like as good of a place as any.

A: I have so many! I’ll do them rapid fire: Jennifer Brian taught me a lot in the classroom, but even more about how to stand up for myself and value myself in my everyday life. Elliot Winter taught me to write for myself and not to please others. Mark Lussier taught me more about academic writing than I ever even wanted to know. And Joyce Jamerson taught me about the joys that can be found in even the simplest stories for children.

A: If you’re unhappy, don’t be afraid to change things up. I went through three schools and five majors before I finally landed on one that felt right, and that wasn’t until the second semester of my junior year. Don’t feel like you have to stick with something just because you used to think you wanted to. Go crazy!

A: I did almost all of my studying on the light rail because I lived in Phoenix and commuted to Tempe at least once a day and occasionally twice a day. If you’re considering making the light rail your cozy study corner, first ask yourself: Do I want this studying to be uninterrupted and productive? Am I okay with it always smelling kind of weird? Does prolonged eye-contact with strangers in an enclosed space make me uncomfortable? If you answered no-yes-no, then the light rail is perfect for you.

A: That is very kind of you to say! As a matter of fact, I've done a lot of comedy. At Emerson College in Boston, I actually was majoring in comedic arts. Yes it's a real major, and no it's not the same as Clown College. I ultimately decided that comedy was something I wanted to do for fun, as an outlet, rather than something I wanted to pursue professionally — but I still write and perform as much as I can.

A: Long-term, I have a job with Cisco — the tech company, not the food one — on their Global Sponsorship Marketing team. I start in late January, and I’ll be working from home until things are safe and they re-open their San Jose office sometime next year.

Short term, I have just over a month in-between graduation and when I start working full-time. I would like to use that month to learn how to play the song “Man or Muppet” on the piano, to learn how to solve a Rubik’s Cube and to beat my computer at chess.

A: I have a lot of questions about this question: Who gave me this money? More importantly, why did they choose me? This seems like an awful lot of decision-making responsibility for someone who generally bases his choices off what his mom says to do. Why couldn’t they just use the money to fix this problem themselves? If they’ve got $40 million, they are probably much smarter than me — my bank account has $11.37.

But, if this were to happen, I’d like to use the money to help facilitate prison reform in the United States. Mass incarceration and the prison industrial complex are serious issues that need attention, and every dollar I can contribute in my life to helping ameliorate this blemish on our country is a dollar well spent.