How environmental humanities is changing the renewable energy conversation

In September, the Department of Energy released the Solar Futures Study, outlining the Biden administration’s efforts to tackle climate change and significantly increase the use of renewable energy throughout the United States. One of the main takeaways of the study is the administration’s vision of decarbonizing the nation’s power grid by ramping up solar energy to power 40% of the nation by 2035.

With additional renewable energy sources can come a myriad of benefits and costs that aren’t always equally distributed to all communities. It’s at this intersection of environmental issues and socioeconomic implications that you’ll find Matt Henry, an alumnus of Arizona State University who received his PhD in English literature in 2018. Henry, an assistant instructional professor at the University of Wyoming, has been working in the growing field of environmental humanities for years, focusing on environmental justice as well as energy and water transitions.

This summer, Henry co-authored an article titled “Just transitions: Histories and futures in a post-COVID world” that explores how the energy landscape is rapidly changing and why equitable, community-driven energy transitions are essential. Henry and his co-authors also describe how the pandemic has affected energy demand and how the major COVID-19 relief packages could offer an opportunity to accelerate the energy transition in a way that is socially acceptable. Since its publication in the Energy Research and Social Science journal, the article has been widely cited, including in the Department of Energy’s recent study.

Henry and his co-authors — Morgan Bazilian, the director of the Payne Institute for Public Policy and a professor at the Colorado School of Mines, and Chris Markuson, the director of Colorado and State Economic Transition Policy for the BlueGreen Alliance — were inspired to write the article after recognizing the lack of discussion on just energy transitions in Wyoming, a state that predominantly relies on fossil fuels.

“People don't want to face the fact that we need to transition from fossil fuels to renewables. So we felt this could be a unique perspective,” Henry said. “It’s an amalgamation of just transition frameworks and theories and sort of projecting an outlook moving forward from the pandemic and rethinking what the energy transition could look like. Seeing it cited pretty extensively in the administration's plan for accelerating solar development in the country was much to my surprise as someone with an English PhD. My work is potentially influencing policy, even if it's just a little tiny way.”

Henry details issues like these in his forthcoming book “Hydronarratives: Water, Environmental Justice, and Imagining a Just Transition,” which is set to release next year. Here he shares more about his recent work on just energy transitions and what gives him hope for the future. 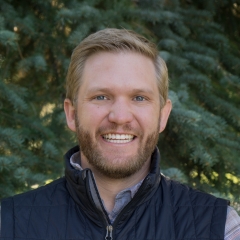 Question: What drew you to the field of environmental humanities?

Answer: I excelled in English and humanities in high school and college, but I didn't really know what I wanted to major in. So I went with English because I was good at it and I enjoyed it. Eventually I liked it enough that I thought I’d pursue a PhD in English, but I also grew up in western Montana and I've always been involved in outdoor recreation like hunting, fishing, backpacking, skiing, rafting, all of those sorts of things. That combination really got me interested in the environmental humanities and thinking about environmental issues through a humanities lens. I was really drawn to literature from multiethnic writers in the United States and postcolonial studies, and how literature can help us understand social justice issues, so that's how I decided to focus on environmental justice and environmental humanities.

Q: How would you say the COVID-19 pandemic has impacted the transition to cleaner energy sources?

A: In some ways it's accelerated it or at least given us a window into what's possible. We've seen lots of social spending and stimulus in the economy. We've seen the suspension of student loan repayments. We've seen child tax credits go out to people. We've seen unemployment money extended for long periods of time for people out of work due to COVID. This is related to climate and energy because it suggests that a lot of what people have long argued is not possible from an economic standpoint is possible. That could mean subsidizing renewable energy, or scaling back leasing public lands for oil and gas development. In a sense, it's expanded the notion of what conventional wisdom suggests is possible politically and economically.

On the other hand, COVID has also become really divisive from a public health standpoint, in some ways deepening the political division in our country, which might make it even more difficult going forward to persuade broad swaths of the public that we should invest in renewables and that we should develop climate-friendly policies.

Q: What do you believe a just transition would look like in respect to an increase in solar energy over the next decade?

A: I think there's no quite right answer, because I think one of the key ideas around just transition frameworks is that policy around their energy transition should be community-driven — should take into account input from all stakeholders, should be responsive to historical inequities and exclusions, and should be rooted in place and local community values.

For example, what solar looks like outside of Laramie, Wyoming, is very different from what it might look like in a place like northwestern New Mexico where the populations are largely Indigenous. In the Navajo Nation, there's a push for the retirement of coal-fired power plants and the implementation of solar and wind and so forth. In New Mexico, there's been a lot of advocacy for policies that are responsive to issues facing Indigenous communities. Whereas in Wyoming there are issues related to land rights for ranchers, outdoor recreation and tourism.

At the bottom it should always be responsive to community — community needs, community values — and be rooted in place. Ideally the federal government is going to be able to be responsive, and that means going into communities and engaging with people on the ground.

Q: What gives you hope about the future when it comes to the climate crisis?

A: Young people, my students. Here in Wyoming there's a huge generational divide. Older folks who are the most vocal who tend to be in elected positions really don't want to face change or take risks professionally and politically, but the young people here are really, really raucous and vocal about what they want. I am increasingly inspired by the students I have in my classes. They're coming up in a time in which they're being told that civilization is in peril so they don't really know anything different.

Even as a millennial who came through the Great Recession and COVID, you have some memory before that of a time when things seemed to be relatively stable and climate change seemed like a distant threat. Young people today are being born into this existential threat and yet they’re still coming out in the streets advocating for justice, advocating for action and doing really inspirational interdisciplinary work at the university level.