By the mid-1980s, Jane Goodall was already internationally renowned for her groundbreaking work illuminating the lives and minds of chimpanzees when she paid a visit to a research facility where the animals, humankind’s closest living relatives, were being subjected to painful and sometimes deadly medical experiments.

At the sight of one chimp in particular, called Jojo, locked in a 5- by 5-foot cage, Goodall began to weep. Upon seeing this, Jojo reached out toward her and gently wiped away her tears.

This is the story Goodall tells when people ask her why she left Gombe Stream National Park in Africa. The incident with Jojo had affected her so deeply that it compelled her to step out from the shelter of her beloved forest, where she had lived and studied chimps for more than two decades, and into the next phase of her career, which saw her doggedly advocating for the protection of their lives and habitats.

Goodall recounted all of this during a virtual event hosted Wednesday, Nov. 17, by Arizona State University that served to kick off the 2021–22 season of the Department of English’s TomorrowTalks, a series of discussions that leverage the power of storytelling to facilitate conversations between current thought leaders who have already made sizeable impacts on the world and the students who represent the next generation of changemakers.

Throughout Wednesday’s event, Goodall discussed a range of topics covered in her latest book, “The Book of Hope: A Survival Guide for Trying Times.”

One of the many benefits of hosting Goodall, said ASU Professor and series organizer Kyle Jensen, is the example her ability to bridge humanities and sciences for young people.

“We try to find speakers that students and the wider public will recognize, that will inspire them to think about the most exigent problems that we're facing as a human race. And the most exciting questions that are being raised and attempting to be answered at the moment are at the intersections of the humanities and science,” Jensen said. “(Those fields) need to collaborate because the problems we face are sufficiently large and complex enough that many minds of many perspectives need to come together on them.”

Earlier in the week, it was announced that the Jane Goodall Institute Gombe Research Archive — which contains over 60 years of observations of wild chimpanzees in the form of hundreds of thousands of handwritten notes by hundreds of researchers — will soon find a home at ASU’s newest, state-of-the-art research building, Interdisciplinary Science and Technology Building 7 (ISTB7).

Ian Gilby, an Institute of Human Origins research scientist and associate professor with the School of Human Evolution and Social Change, will oversee the archive. Himself a primatologist, Gilby helped to build a database for the archive as a doctoral student at the University of Minnesota. Since coming to ASU in 2014, he has been instrumental in securing an agreement to bring the archive along.

“This is a really perfect partnership between ASU’s Institute of Human Origins and the Jane Goodall Institute because ASU is so big, and it has this culture of innovation and transdisciplinary research,” Gilby said. “And here, we've got this unique resource that many, many people will be interested in. Not just anthropologists, but biologists, scholars of women's studies, historians, neuroscientists … all these different disciplines can work with this archive.”

An ASU Pitchfunder campaign has been started to ensure the best possible storage of the Gombe Research Archive – which includes upgrading to fire- and water-proof filing cabinets fitted with acid-free, archival-quality folders – and donations are being accepted here.

Goodall is the first to be featured in the TomorrowTalks’ “Women in Science” lineup, which will continue in February 2022 with Meg Lowman, author of “The Arbornaut: A Life Discovering the Eighth Continent in the Trees Above Us,” followed in March with ASU’s own Pardis Mahdavi, dean of social sciences in The College of Liberal Arts and Sciences and author of “Hyphen.” 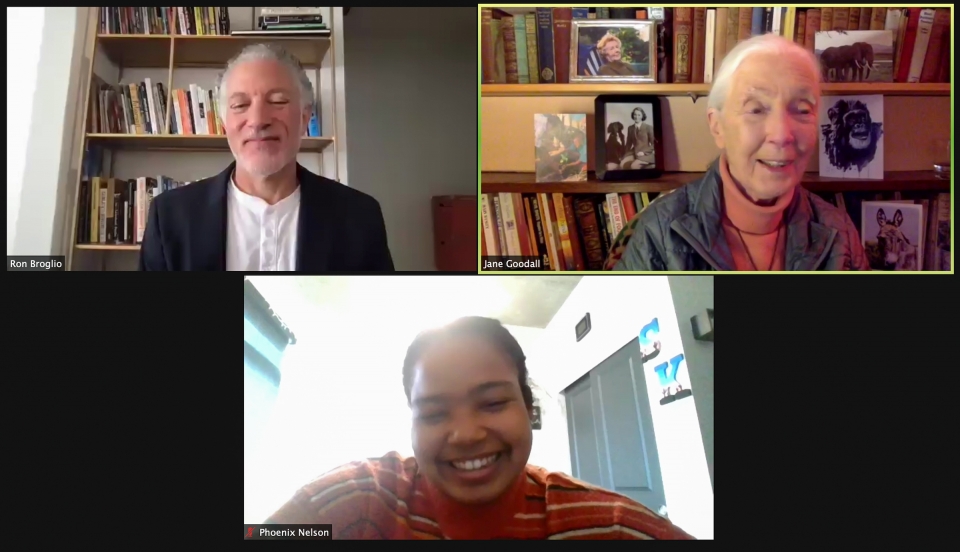 Phoenix Nelson (bottom), an undergraduate studying applied math for life and social sciences at ASU, asks Jane Goodall a question about how to have constructive conversations about the environment during Wednesday's webinar. Photo by Samantha Chow/ASU News

Professor Ron Broglio facilitated Wednesday’s discussion with Goodall, at one point asking her about her own female role models growing up. Goodall said she was very lucky to have strong women in her family who supported her dreams and goals, especially her mother.

“I was born loving animals. I was 10 when I dreamed of going to Africa. But girls weren’t scientists then,” Goodall recalled. “But my mother said if really wanted this, I was going to have to work really hard and take advantage of every opportunity, but that if I didn’t give up, I might get it.”

Goodall spoke to the audience via Zoom from the house where she grew up in England. It was there that she spent her formative years whiling away the days in the garden and reading books like “Doctor Dolittle” and “Tarzan of the Apes.” Despite her love for the natural world, Goodall had received no formal scientific training when she first began studying chimps in Africa in 1960. It wasn't until two years later that Louis Leakey, the Kenyan archaeologist and paleontologist under whose tutelage she had been working, arranged for her to pursue a degree from the University of Cambridge.

“I think my experience coming in with an unbiased mind is perhaps something universities should think about,” Goodall said. “I think it’s even more important for education in elementary schools. Children, especially young ones, need the chance for outdoor education and to learn by seeing and asking questions, not just being given information — facts and facts and facts — that they’re probably not that interested in.” 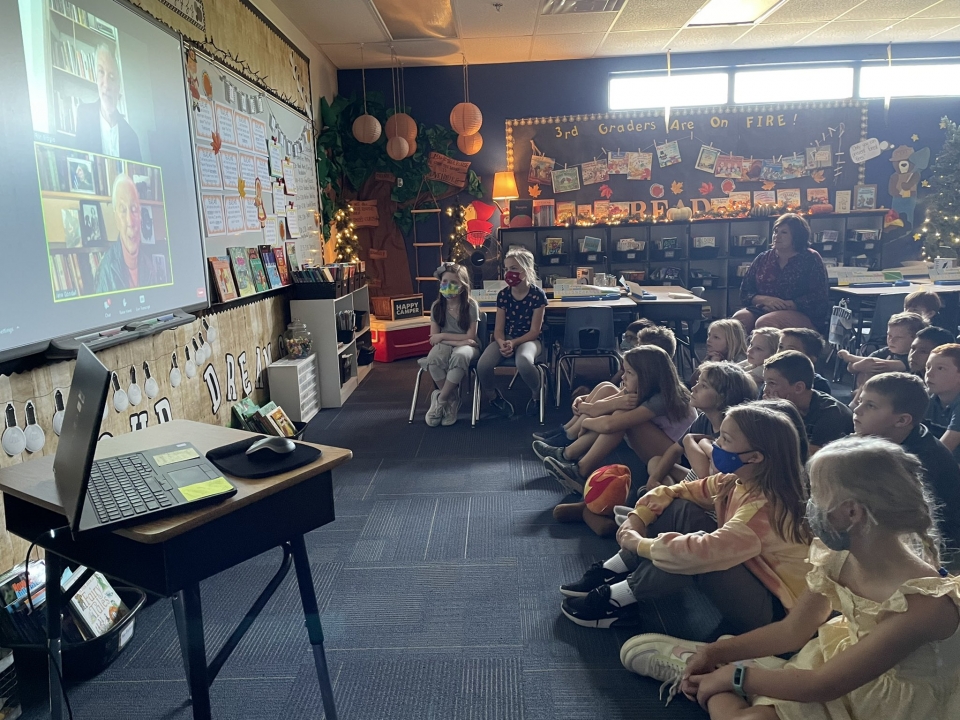 A young child at the outset of World War II, Goodall credits the adversity she and her family experienced at that early point in her life for the strong sense of resilience that carried her through difficulties later in life.

“(World War II) was a hopeless situation, but we overcame it. … The most important thing we can have now, in this dark time,” she said, referring to the COVID-19 pandemic and related sociopolitical upheavals, “is hope. … Hope is not about looking at the world through rose-colored spectacles … we don’t just sit at the end of our tunnel and hope that light will come to us. No. We have to climb up and over all the obstacles in our way to get to that little light. I think universities have a big role to play in that, because before young minds go out in the world, if we don’t give them hope, we’re doomed.”

In an interview before Wednesday’s event, Broglio — whose research focuses on how philosophy and aesthetics can help us rethink the relationship between humans and the environment — praised Goodall for the work she has done to raise global consciousness about said relationship.

“Oftentimes we live in a world that is a very human world, and we don't make room for other animals, or we expect them to comply to ours,” he said. “So perhaps one of the things that will happen through this kind of dialogue is an opportunity to see that there is a bigger Earth. That there are other animals; it's a shared planet. We know that intellectually, but when you see people who are ambassadors of that idea, all of a sudden new opportunities open up.”

In response to a question from Broglio about how humans can help support the resilience of nature, Goodall pointed to her various conservation efforts as an example, in particular the Jane Goodall Institute’s youth program, Roots & Shoots, which aims to make positive global change through environmental education.

Something all of us should have learned over the past year and a half, Goodall said, is that humans are in desperate need of a new, better relationship with animals.

“It was our bad relationship with animals that led to the pandemic,” she said, referring to the wet food markets that sell fish, meat and wild animals, and where it has been theorized the SARS-CoV-2 pathogen that causes COVID-19 made the jump from animals to humans.

During the portion of the discussion reserved for student questions, inquiries ranged from what actions college students can take now to help create a more hopeful world — to which Goodall responded by suggesting they eat less meat and consider joining Roots & Shoots — to how to have constructive conversations about doing good by nature with people who may not see a problem with the state of the environment or don’t want to invest in sustainability efforts because they inconvenience them.

Goodall responded to the latter inquiry by reemphasizing the power of storytelling, through which deep connections can be made.

“We have to try and reach their hearts,” she said. “We just have to keep trying.”

The entire conversation is now available to view on on the English Department YouTube channel.