It has been nearly a decade since Louise Erdrich’s novel “The Round House” first told the story of Joe Coutts, a 13-year-old boy living on an Ojibwe reservation in North Dakota who takes it upon himself to seek justice for his mother’s attack. But the themes it explores – for better or worse – are still relevant today, and the way Erdrich weaves them into her story makes it accessible to Native and non-Native communities alike.

“That’s (Erdrich’s) gift,” said Amanda Tachine, an assistant professor in ASU’s Mary Lou Fulton Teachers College who identifies as Diné. “She's able to talk about all of these issues, like … blood quantum, jurisdiction, coming of age … community and sovereignty and friendship … she's able to pack so many strong issues into a narrative story form.”

Tachine’s comment came during a discussion she moderated on Feb. 27 that was hosted by the Virginia G. Piper Center for Creative Writing in order to kick off the National Endowment for the Arts Big Read: Phoenix. Using Erdrich’s novel as inspiration, the NEA Big Read: Phoenix features over 25 talks, workshops, book clubs, performances, art exhibitions and other virtual events celebrating Indigenous literary arts and culture across the Valley during spring 2021.

The next event, “Get Lit: Colonization,” takes place Thursday, March 4, and will also be led by Tachine as she guides attendees in a conversation about the history of colonization.

In an introduction to the kick-off discussion, Piper Center Director and poet Alberto Ríos cited Arizona’s large Native American population – including 22 federally recognized Tribal Nations, the third largest of any U.S. state – for making Erdrich’s “The Round House” an obvious choice for this year’s NEA Big Read.

Fellow poet Jake Skeets also spoke briefly, welcoming attendees from as near as Mesa, Arizona, and as far as Canada before introducing the evening’s featured guests, poets Luci Tapahonso and Laura Tohe, whom he explained would be exploring such topics as Diné womanhood, the power of storytelling and how Indigenous narratives can guide the way toward reconciliation, healing and Native Nation-building.

“Language is why we're gathering tonight,” Skeets said. “Language is a tool for beauty, and storytelling is the practice of language. Indigenous people have thrived for decades because of storytelling.”

Tachine began their discussion by asking the poets what they had been up to during quarantine. Though thankful for the time they’ve had to rediscover lost hobbies like gardening and weaving, Tapahonso and Tohe also expressed gratitude for having received their second doses of the COVID-19 vaccination and for their families’ safety to this point, acknowledging the detrimental impact the pandemic has had on Native populations.

“It just makes me want to cry because we've lost so many (people), and I think about the loss of language that's going to happen because the older people are taking the language and the culture and the philosophy teachings with them,” Tohe said. “I think about our health as Native people, because long ago … we could do things like we grow our own food, and that was nourishing to us, that was our food sovereignty. We exercised more. We walked, we rode horses, we herded sheep. All of that we've left behind, and I think that we have to think about how we can make our bodies strong again, how we can keep our languages and nourish our culture. … So I’m really hopeful that we will learn some lessons from this pandemic and that we can become a stronger people and a stronger nation.”

The strength of Native women in particular was a topic that dominated much of the evening’s discussion, just a day before March 1 heralded the beginning of National Women’s Month.

“We really have a strong matriarchal tradition,” Tapahonso said. Both she and Tohe recalled time spent as children with not just their mothers, but their aunts and grandmothers, who not only handled domestic chores and raised children but also cattle, and worked full time on top of that.

“They’d be cooking and they’d be planning and strategizing and being leaders (at the same time),” Tapahonso said. “I just learned so many valuable teachings from them while I was there, running around helping them.” 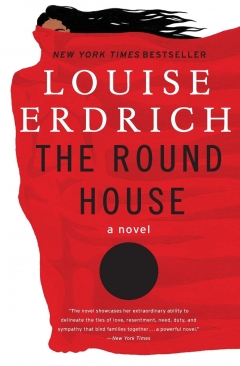 In “The Round House,” the attack on the main character’s mother reflects the all too real epidemic of violence against Native women, who are murdered at a rate 10 times higher than other ethnicities. Her son’s attempt to bring her attacker to justice reflects another unfortunate truth for Native people.

“In a sense, he has to sacrifice himself,” Tohe said. “And he's only 13, and as I was reading this, I was thinking how much (of) a burden (that is) on such a young boy, to have to do what he did for his mother because of the failure or the limitations of Western forms of justice. … I think the novel really brings out the juxtaposition of what is justice and how it is defined by Western society and how it is defined by tribal people. And … there's conflict there.”

One of the other overarching themes of the book is the power of community, something Tohe and Tapahonso agree plays a big role in the lives of Indigenous peoples.

“Our sense of community is foundational as Native people,” Tohe said, pointing out that at the beginning of the evening’s discussion, all of the speakers introduced themselves by their clan, or family of origin. She and Tapahonso credit their communities and their strong tradition of storytelling for inspiring them to become writers.

“A lot of my writing is based in stories that were told to me,” Tapahonso said. “We just always just fall into the storytelling. … One of the things I like about ‘The Round House’ is that it's told in a way that is both contemporary and yet traditional. That's why we recognize ourselves (in it).”

“For me, storytelling is part of that belief in what my mother said, that without stories, you don't have much inside you,” Tohe added. “She was saying that you have to know stories because they guide you through life. It's something you can pass on.”