Mitchell Jackson has a story to tell.

It’s about a boy growing up in Portland, Oregon, with a drug-addicted mother. About a young man who went to prison for dealing drugs, and while incarcerated, began to write about his experiences.

It’s about thoughts becoming words, the words becoming a novel and the novel — "The Residue Years" — winning the Whiting Award and The Ernest J. Gaines Prize for Literary Excellence.

And that was only the beginning.

He’s written for the New York Times, Esquire, the Washington Post Magazine and several other publications, and now, as the John O. Whiteman Dean’s Distinguished Professor of English at Arizona State University, he’s hosting Conversations in Craft and Content, a new creative writing lecture series that brings lauded writers to ASU to talk about their work, as well as their writing and revision process.

Jackson’s first conversation will be a virtual event with two-time National Book Award winner Jesmyn Ward at 6 p.m. Arizona time Friday, Feb. 4. The conversation is free of charge and open to the public. Register here.

ASU News caught up with Jackson to talk about his journey as an author, the lecture series and what advice he would give to aspiring writers. 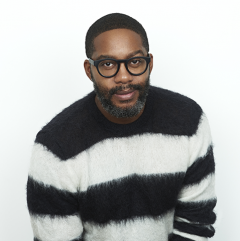 Question: Mitchell, your journey to becoming a writer is interesting. Your mother was a drug addict, and you became a teenage drug dealer who wound up in prison. When and how did you decide that you wanted to become a writer?

Answer: I guess the easy narrative is that I decided that in prison, because I did start working on a manuscript … I didn’t even know to call it a manuscript. I started writing some words down that I intended to become my life story while I was in prison. But I also didn’t know what it meant to be a writer. It was really just an exercise to mainly get acclimated to going back to school and have something to do to make myself feel productive. Because I didn’t know what a writer was, I didn’t know I was pursuing writing as a career until I was in graduate school. That would have been at Portland State University in 2000. So I was already in a graduate writing program before I realized, “Oh, this thing could actually become something that I do.”

MORE: When it comes to writing, Mitchell Jackson's wound is his bow

Q: Is it true that when you went to prison you heard other inmates say, “My life story would make a great book,” and that’s when you decided to write your life story?

A: That’s true. It’s the thinking that this suffering has to have some value.

Q:  How did your upbringing impact who you are as a writer and what you write?

A:  It gave me a subject. I’m always writing about home. I’m always writing about my family. I’m always trying to make sense of both our triumphs and our struggles. I’m always trying to represent a really small Black community in Portland, so out of those themes … I don’t consider myself to be a particularly imaginative writer in terms of creating stories or writing science fiction or imagining a different world or another era. I’m really trying to make sense of what is happening in things that are close to me, so without this kind of experience, I would have less to kind of delve into.

Q: I was going to ask how you come up with ideas, but it sounds like what you write is personal and based on your life experiences.

Q: What is the creative process for you like once you’ve decided on an idea?

A: It’s different for different projects. With Chris Rock, it’s easier. If I’m writing a profile, I’m going to do research on the person and their background. Try to read and watch and listen to as much as I can. Then try to think what is the central question I want to answer about them. With a celebrity, you usually don’t get as much time with them, so you have to figure out what the angle is and then there’s taking a lot of notes. I remember the Chris Rock story. I went to his old neighborhood and just kept walking around the block where he grew up. I went to where his father used to work. I went to the comedy places he used to perform at. He’s not with me when I’m doing these things, but I just wanted to get an idea of what it’s like to be him.

Q: How much research do you generally do when writing a novel or a long feature story?

A: My first novel was autobiographical, so I could talk to people who were in my life. The person I interviewed the most was my mother, which was great, because I could call her up at any time and say, “Hey, mom, I need 20 minutes of your time.” With the novel I’m working on now, it’s hard to ballpark because I’m still at the beginning of it … I think you have people you know you need to go back to, so with this one — I’m writing about people who were with a former coach — so two of those people, I have interviewed extensively, multiple times. A lot of this also is looking at archival footage. So I imagine I’ll go back to them throughout this novel and do a lot more. It’s set in Watts, so I’ll want to go spend a few weeks in Watts and just walk around and talk to people there. For the Chris Rock story, I probably interviewed 15 people. Not all of them made it into the story.

Q: What is the new novel about?

A: It’s titled “John of Watts.” It’s about a young man who was a college basketball player who didn’t make it to the NBA and started a youth program in Watts to train at-risk youth to become athletes who would lift themselves out of their circumstances, and then the training became really strict, and then it morphed into abuse, and then they started living in a commune, and it essentially became a cult. There was a young girl, the founder’s daughter, who was beaten to death, and that’s when authorities came in and found out what happened.

Q: This is a non-fiction story?

A: It’s a non-fiction story that I’m fictionalizing, yes.

Q: What is your rewrite process like when you’re working on a piece, and how do you maintain the discipline to rewrite and rewrite again and again?

A: I think you have to figure out what standard of excellence you want to hold yourself to. I think a lot of that comes from reading, reading what you think is great work and reading as a writer what is working and what you admire. Then it’s, do you have the stamina and the wherewithal to sit down every day? I don’t write every day, but when I commit myself or I have a deadline, I’m eight, 10, 12 hours in a chair. Sometimes 16 hours in a chair. I’m not advocating this for anyone, but over a weekend, I can spend 20 hours working on pages to hand to my editor. I will look at them and say, “Well, I could quit here and just give it to her because I know I’m going to edit it,” but I also know I can’t live with showing someone this. It’s really what you can live with. It’s not what the editor will say. It’s what you can live with, and I’m trying to hold myself to a standard of greatness.

Q: As a Black man, do you think you bring a different perspective to your work?

Q: You’ll be speaking to two-time National Book Award winner Jesmyn Ward as the inaugural guest in the series. What about her writing captivates you?

A: Jesmyn may be the most acclaimed woman fiction writer we have. I think one thing that connects me about Jesmyn is that she’s always writing about home. She’s trying to elevate or to show people what it means to be where she’s from, and I find that commitment really inspiring and really worthwhile. I thought, “Who better to do this?” She’s also a novelist primarily, so there’s a different kind of mindset you need to write a novel than, say, a feature. So I want to talk about that, especially for our students, who write a six-to-eight-page essay. You can do that overnight, but can you commit to something for six years where you have to touch it every day? That’s a different commitment level to writing.

Q: One last question. What’s a singular piece of advice you would give to students who are aspiring writers?

A: Keep going. Because you don’t want to quit. You either have to have someone in your ear telling you that or you've got to believe it.