The School of International Letters and Cultures brings the 21st U.S. poet laureate, Juan Felipe Herrera, to Arizona State University for the 14th Gathering of Latin American Writers in the United States, held Sept. 22–25 as part of Hispanic Heritage Month.

Herrera is the first Chicano/Latino in the history of the United States to hold such a position for two terms. A central theme throughout his poetry career has been local and global pan-ethnic resistance in the face of conventional society, a theme first identified in 1981 during an interview with German critic Wolfgang Binder.

The only son of a Chicano migrant couple

Herrera’s rise to the 21st U.S. poet laureate is a remarkable achievement. Born in 1948, he was the only child of a migrant worker couple from Bowler, California. His father, Felipe Emelio Herrera, came from a small village in Chihuahua, Mexico. His mother, María de la Luz Quintana, was from a family of nine from the Niño Perdido district in Mexico City, Mexico.

Herrera’s parents met in El Paso, Texas, and then moved to California, where they continuously followed the seasonal crops circuit. He was 9 years old when Herrera's parents decided to settle in San Diego. From 1958 forward, Herrera became an urban dweller, and he has traveled repeatedly across the Southwest, particularly the Chiapas region in Mexico, as well as throughout Europe and South America.

His recent poem “The Poets Are Gathering” shows a new Herrera who has become a world citizen. In these verses, he refers to poets and poetry in 26 countries. In the closing verses, he writes: “The poets are gathering/… All around all around the poets/ The poets are saying/… everything is changing/ Hey/ me/ everybody/ peace/ is/ you.” 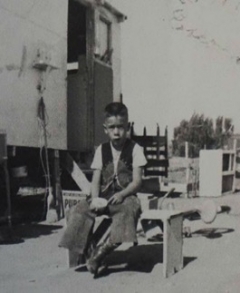 Juan Felipe Herrera at age 7 when his parents were migrant farmworkers in California.

34 poetry books in Spanish and English

Although he began writing poetry primarily in Spanish and has five books and one translation in that language, Herrera has written over 17 other poetry books in English. Herrera has also published more than 10 books for children and teenagers. Four of them have been translated into Spanish, like "La Superniña del Cilantro," published in 2003.

Herrera's local and global pan-ethnic resistance perspective was coded in his book "Exiles of Desire," specifically the poems “Are You Doing That New Amerikan Thing?” and “Ode to the Industrial Village of the World.”

The first one offers a critique of the various activist communities that had emerged in the 1960s and 1970s, but by the beginning of the 1980s were flirting with conservative values. Chicanos, African Americans, Anglo-American radicals, feminists and queers belonged to these communities. Such critique metonymically narrates a local resistance against a newly risen conservative America under Ronald Reagan. That is why, in the poem's title, the word “Amerikan” has a k, instead of a c; the switching of the two letters alludes to the white supremacist organization named the Ku Klax Klan, or KKK, whose primary targets were African Americans, but included Jews, immigrants, liberals, homosexuals, Catholics, Muslims and atheists.

The poem “Ode to the Industrial Village of the World,” which calls attention to rising environmental problems, like asbestos, inaugurates a global pan-ethnic resistance that, from 1983 forward, will also be a central perspective in the poetry of Herrera. 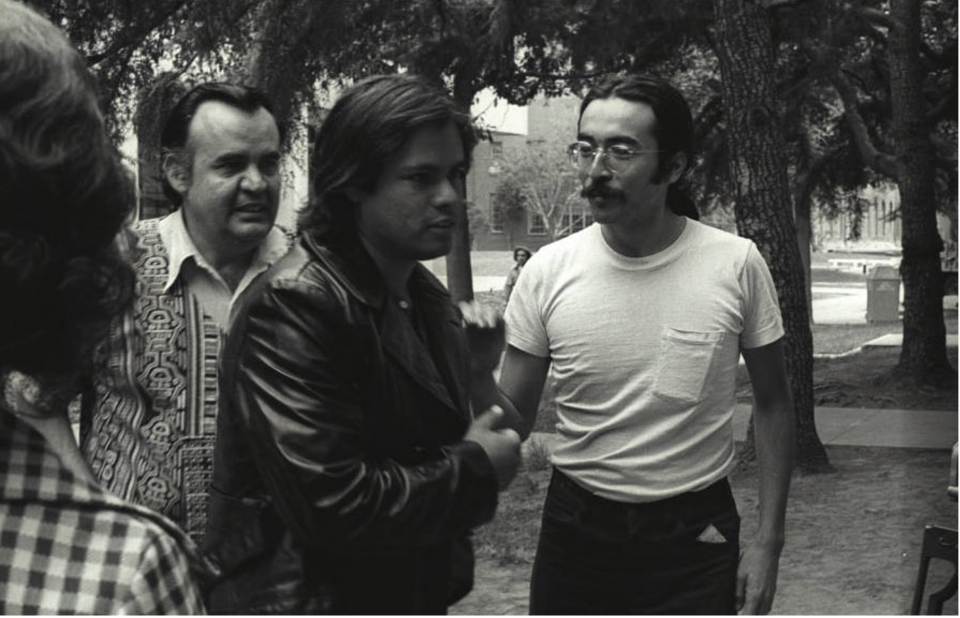 Juan Felipe Herrera (right) sometime during 1979–1983 when he was writing the book "Exiles of Desire."

Other events at the XIV Encuentro

Organized by Daniel Vargas, Graciela Silva Rodríguez and Manuel de Jesús Hernández, the “XIV Encuentro de Escritores Iberoamericanos de los Estados Unidos/Gathering of Latin American Writers in the United States” festival includes film, art, theater and music. All events are free and open to the public, in person at the Memorial Union in Tempe or via Zoom.

The founder of the Encuentro, short story writer David Alberto Muñoz, wanted the Encuentro to feature many artists who performed in person and also celebrated one specific outstanding writer from among the community.

In addition to an inauguration, which takes place from 3:30 to 4 p.m. Sept. 22 in the Gold Room, the Encuentro will feature the highly nominated Mexican film "Sin Señas Particulares / Identifying Features" (2020) by Fernanda Valádez immediately after at 4 p.m.

From 3 to 4 p.m. on Sept. 23, in the Memorial Union's Pima Room, there will be a lecture on the founder of the Encuentro, titled “Presencia de David Muñoz in Culturadoor: Cuentística y Crónica” by Manuel Murrieta Saldívar. The day will close with a lecture on femicide in Ciudad Juárez, from 5 to 6:30 p.m.

From 4 to 7 p.m. Sept. 24, in the Pima Room, there will be two panels of local writers and one panel of researchers presenting their work before Herrera. In turn, he will comment on their work. Herrera will close with the keynote speech “YOLILIZTLI: Todos Somos Migrantes” at 7:30 p.m. There will be a Q&A period for the public.

On the closing day, Sept. 25, there will be poetry writing workshop lead by Herrera at 10 a.m. in the Yuma Room, and from 2 to 3 p.m. in the Pima Room, an international panel on border literature and the presentation of the book "Cancionero de la Pandemia / A Pandemic Songbook" that gathers literary texts on the impact of COVID-19 along the northern Mexican border. From 5 to 6 p.m. in the Performance Art Center at South Mountain Community College in Phoenix, there will be a play, "Mitote: Guelcom 2 Arizón," on the life of Juan Felipe Herrera, and a musical extravaganza immediately following on the works of Astor Piazzolla. This music performance will feature soprano Martha Llamas from Mexico City.

This event is also sponsored by the School of Transborder Studies, the Hispanic Research Center, the Department of English and the Virginia G. Piper Center for Creative Writing.

Written by Manuel Hernández, assistant professor in the School of International Letters and Cultures.